The last post of creating slab two was done from my Android Tablet.  I found that I do not like the app used to create the post and prefer the browser based posting.  Using the app is easy and fast but is not as flexible as using the full browser based posting.  Because of that, the post was much shorter than I would have liked but at least got started creating slab two.

The next picture is of the slab after all of the concrete and wire mesh were in place. The process was the same, put the initial 6 or so bags and spread them dry in the form.  Add the wire mesh on top and complete the filling with enough dry concrete mix to fill the form to just over the height of the forms.  Level the dry mix with a 2X4 long enough to reach from side to side and pull it completely from one end to the other while wiggling it back and forth to spread the dry mix evenly and level.  Once the mix is level, mist sprinkle it for a few minutes and further smooth it as needed.  After the mist has begun to soak the mix for an hour or so, it will start to setup and then you just need to keep it wet for a few days until it is cured. 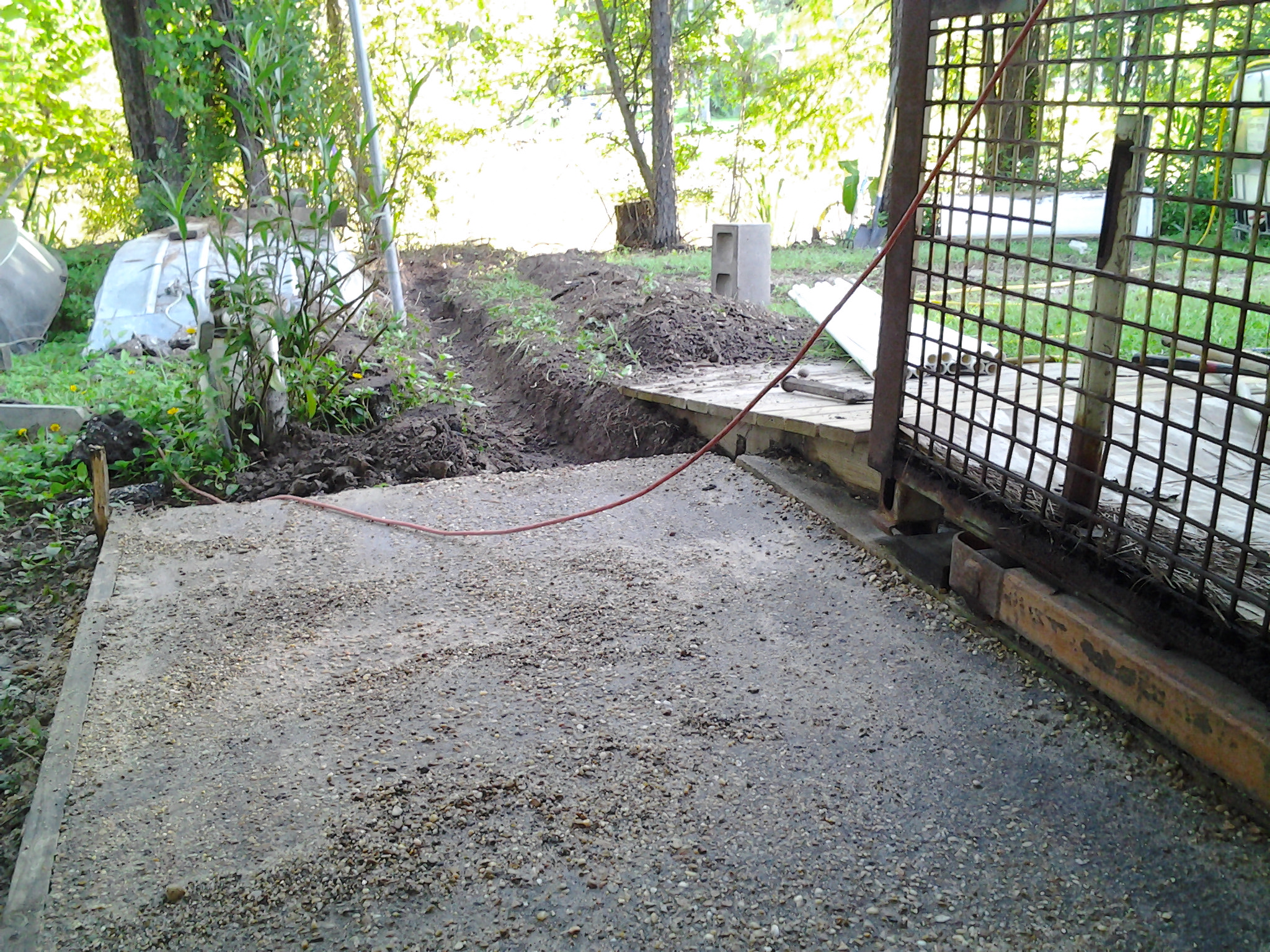 This is a picture of one of the IBC totes I bought.  I found a supplier with food grade contents.  (mine had liquid smoke used to make smoked sausage).  It was water soluble and easily washed out with water.  I purchase 6 of them for $40.00 each.  I plan to use 4 of them in the initial setup and the other two will be for future projects or as a spare should I damage one or cut them incorrectly. 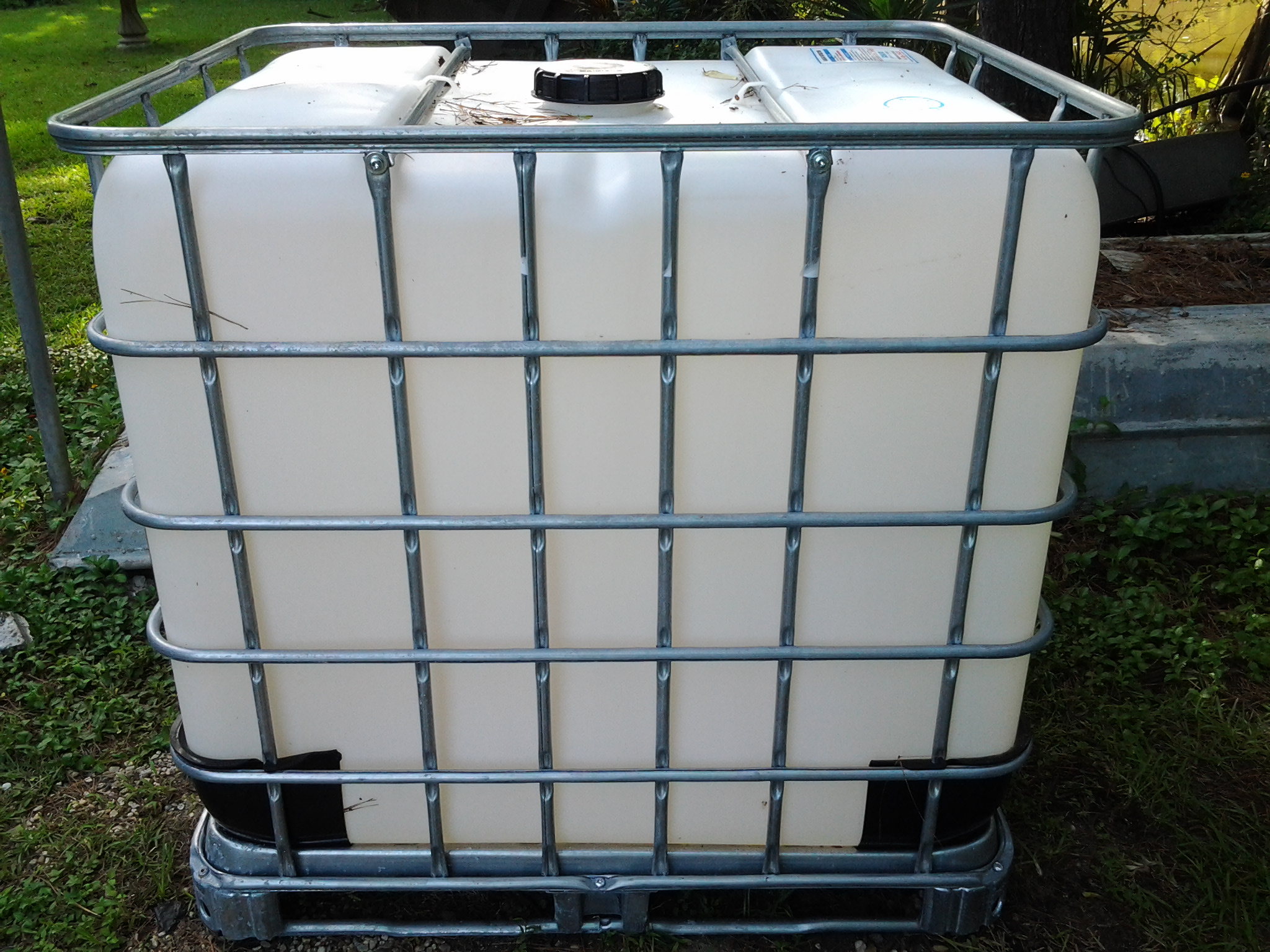 I dug a ditch between the two concrete slabs.  I cheated by using my mini tiller to help with the Louisiana Muck dirt.  This is a picture of the ditch with the PVC pipe I plan to put into the ditch. 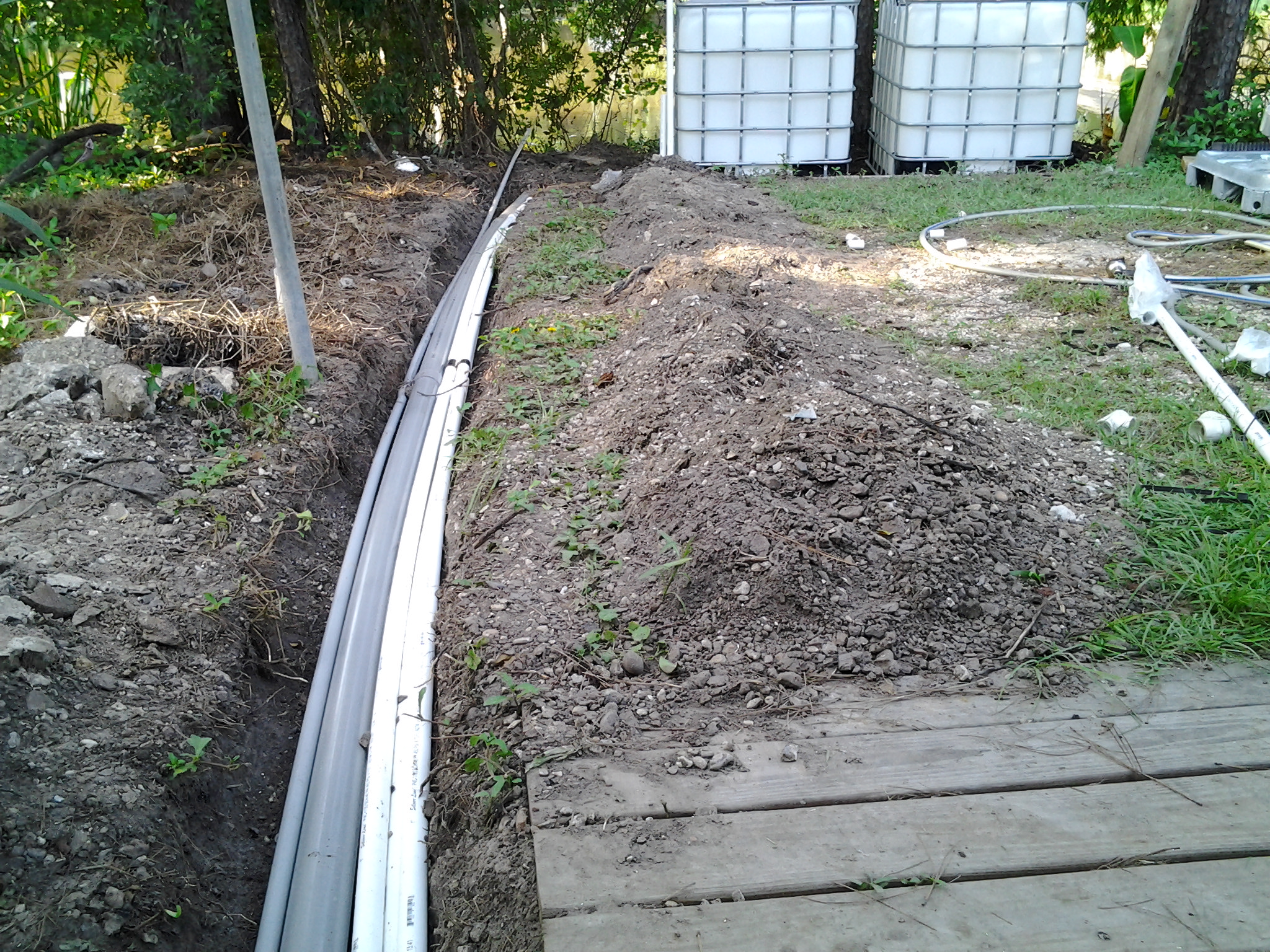 This is the PVC in the ditch.  I decided to use 4 – 1″ PVC for pump and return lines.  2 in each direction.  One 3/4″ Gray PVC electrical pipe for power to the pump and lights if needed.  One 2″ Gray PVC (normally used for electrical) but I am using it as a drain pipe incase I need to drain the fish tank and to handle run off water from rain.

This is how it looks on the reservior / sump tank end.  I have a drain setup on the opposite side of the tanks incase they need to be drained. 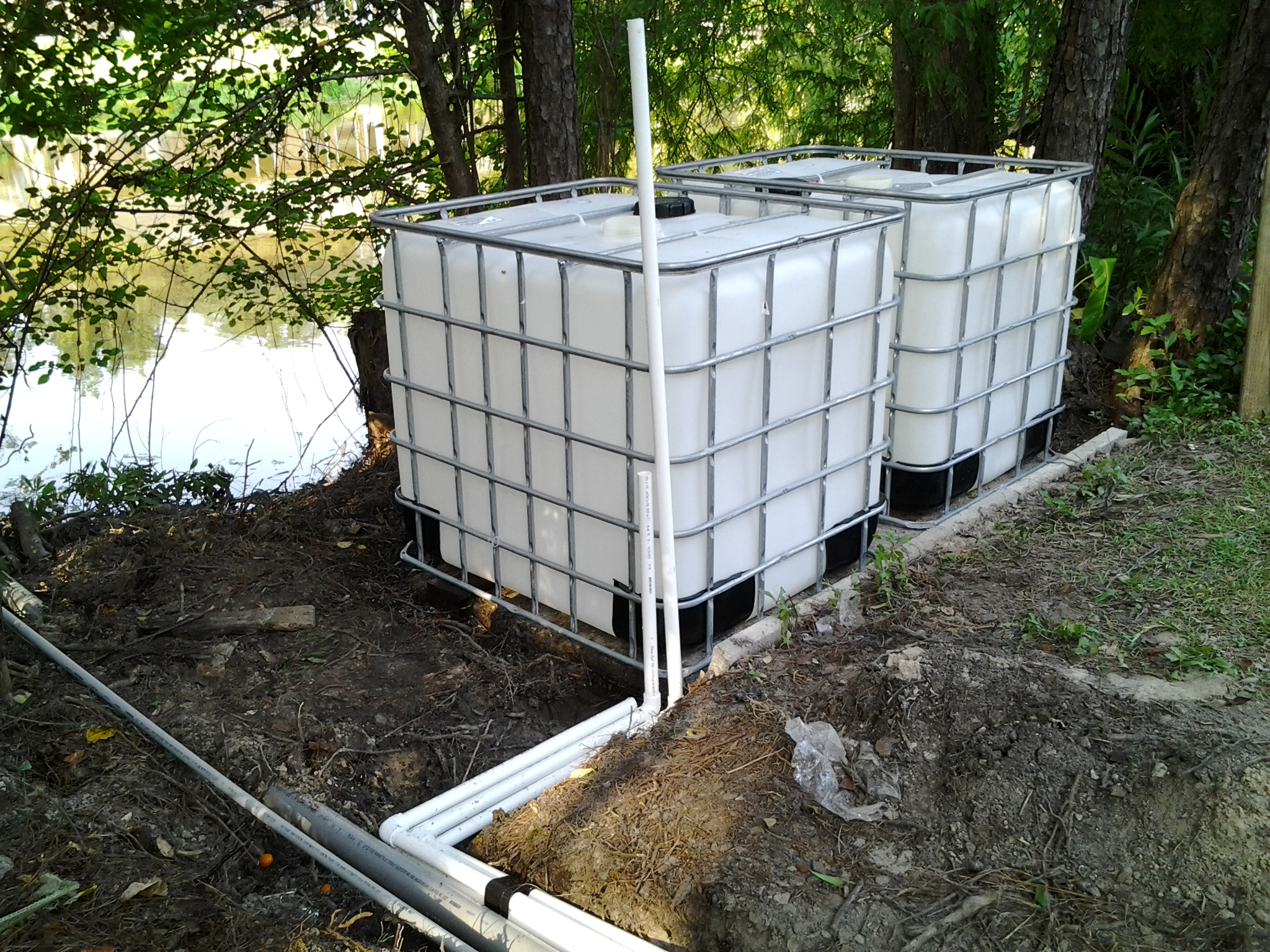 And this is how the fish tank setup looks.  I have not cut the top out of the fish tanks yet.  I’m waiting to decide where / how to cut them.  All of this is mostly trial and error creation so some mistakes will be made and planning each step is essential.

I added a ground level drain and pipes to drain the fish tanks.  These tie into the 2″ pipe and will drain into the bayou. 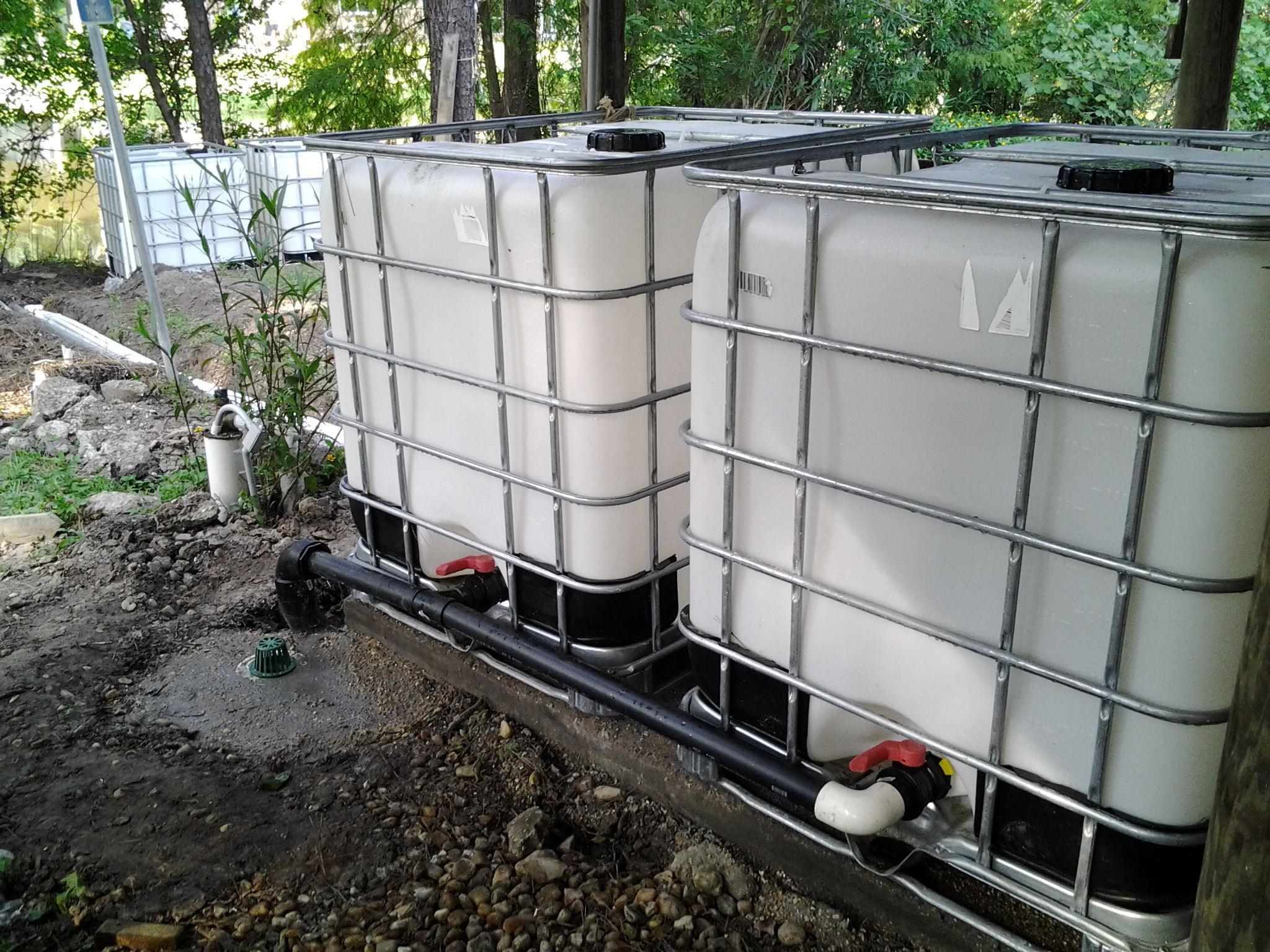 The next phase is to test the drain system and test the pumps.  I’ve been using a simple 12 volt bilge pump 300gph to pump water from the bayou to fill the tanks for testing.  It works well but I think I will need something much larger in the final setup.

Posted in american inventor | No Comments »