My Aquaponics project has been on hold since late August 2012 when Hurricane Issac arrived.  One thing after another kept poping up distracting me from continuing the project.  The hurricane really did a number on the system.  All of the tanks were flooded and most of the semi-buried pipes floated out of the trenches.

But now I’m finally able to continue the project.
I’ve not changed my plan from the original idea and
I have almost completed the filter bed (photo below).

The small half tank on top is the filter bed.
The 2″ pipe comes in at the top left side which is the overflow from the fish tank.
The two full tanks on the bottom are the sump tanks.
The left tank receives the bell siphon flow from the filter container.
When the water fills to just above half way full, it flows into the right tank.
This tank contains the pump that pushes the water back to the grow tubes 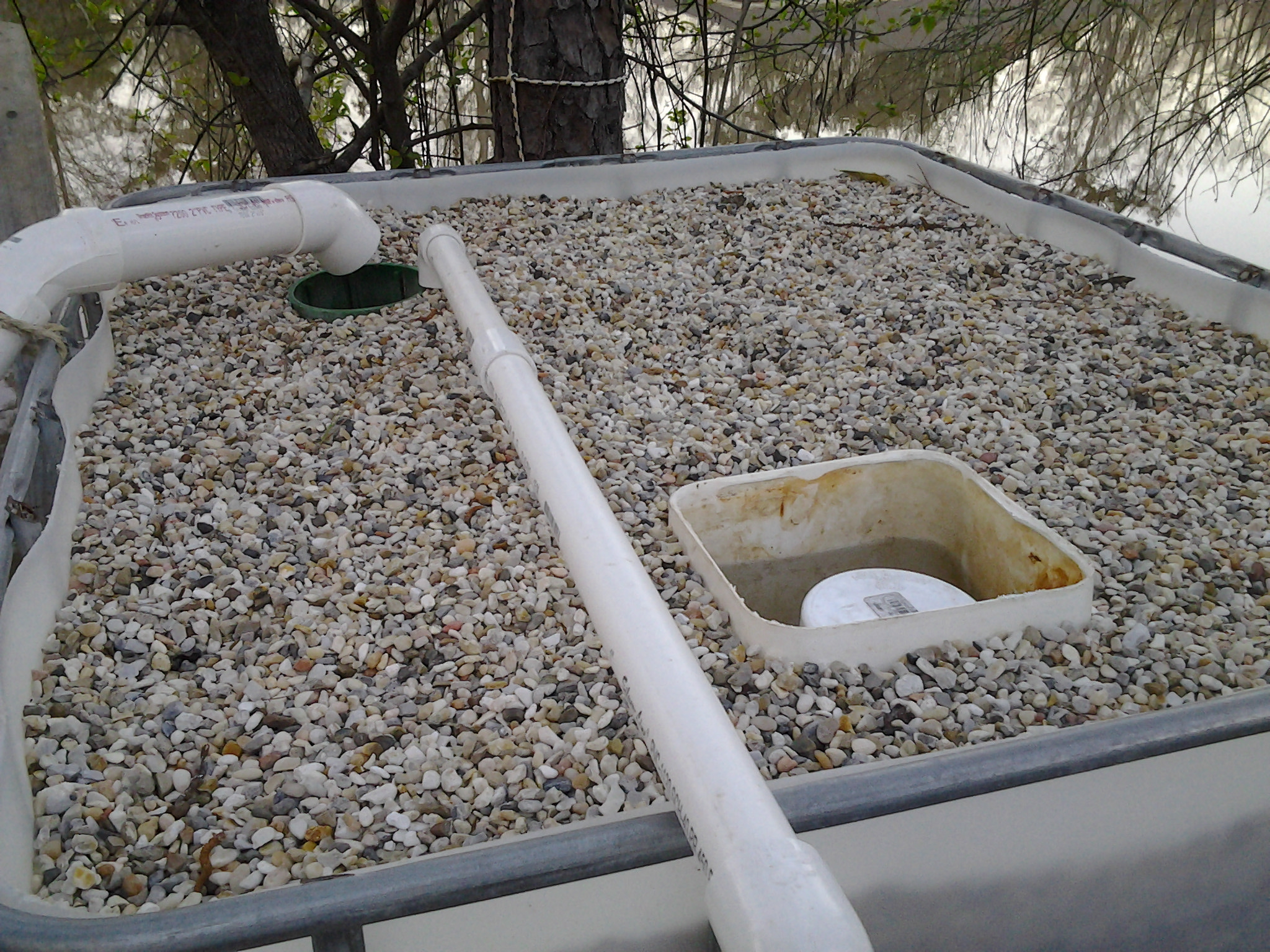 The pump in the sump tank pumps water into a 1″ pvc pipe to the grow tubes 12′ above on the deck around the house.  The 1″ pipe was inserted into the 4″ drain pipe that returns the water from the grow tubes to the fish tank.  I did this to keep the clutter to a minimum and not have to run two separate pipes around the deck.
Here is a photo closeup showing the 1″ pipe entering the 4″ drain pipe just over the fish tank. 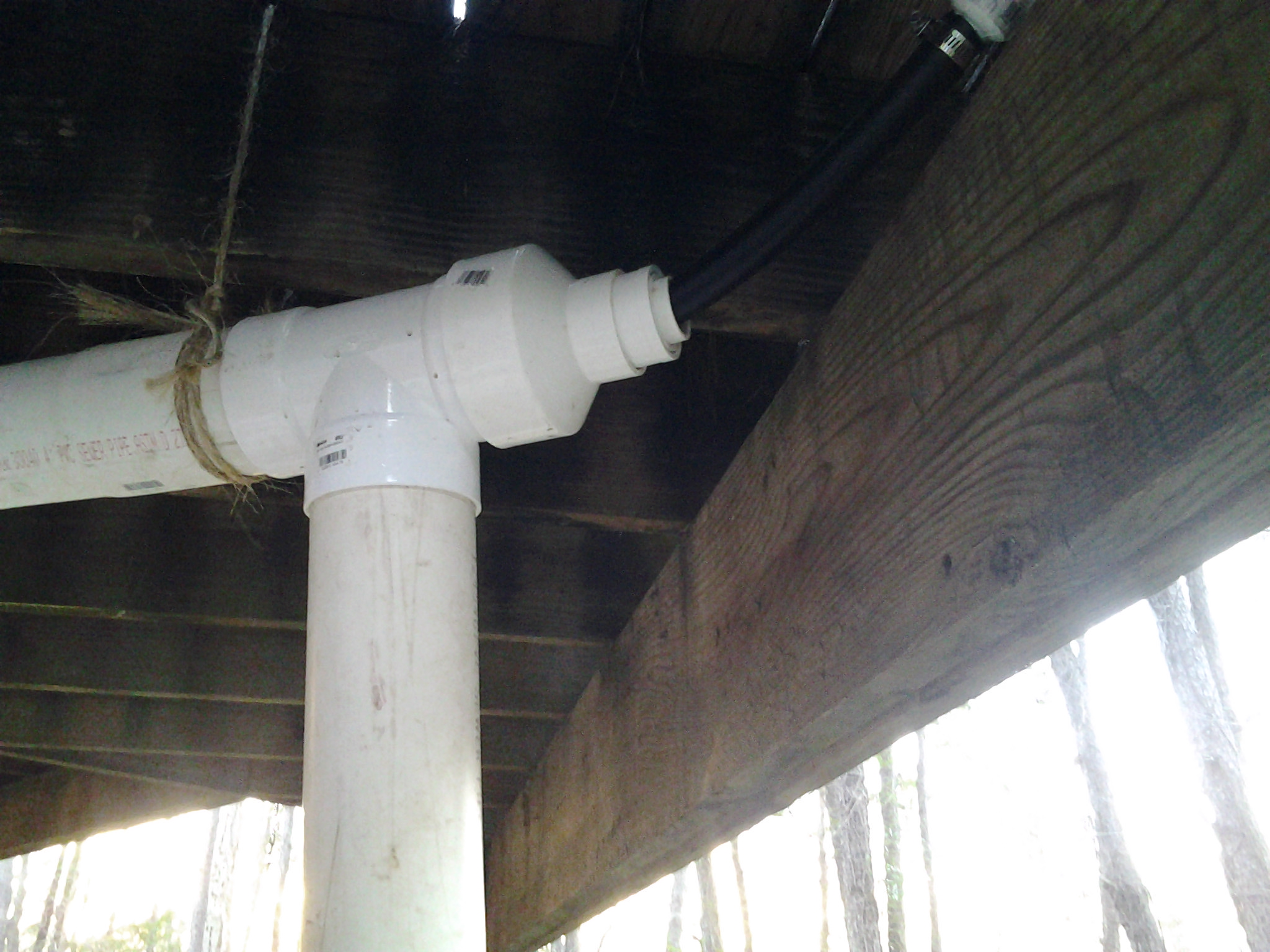 The vertical pipe is a temporary addition until I decide how to return the water to the fish tanks.  The pipes have not been glued and can be moved and changed easily. 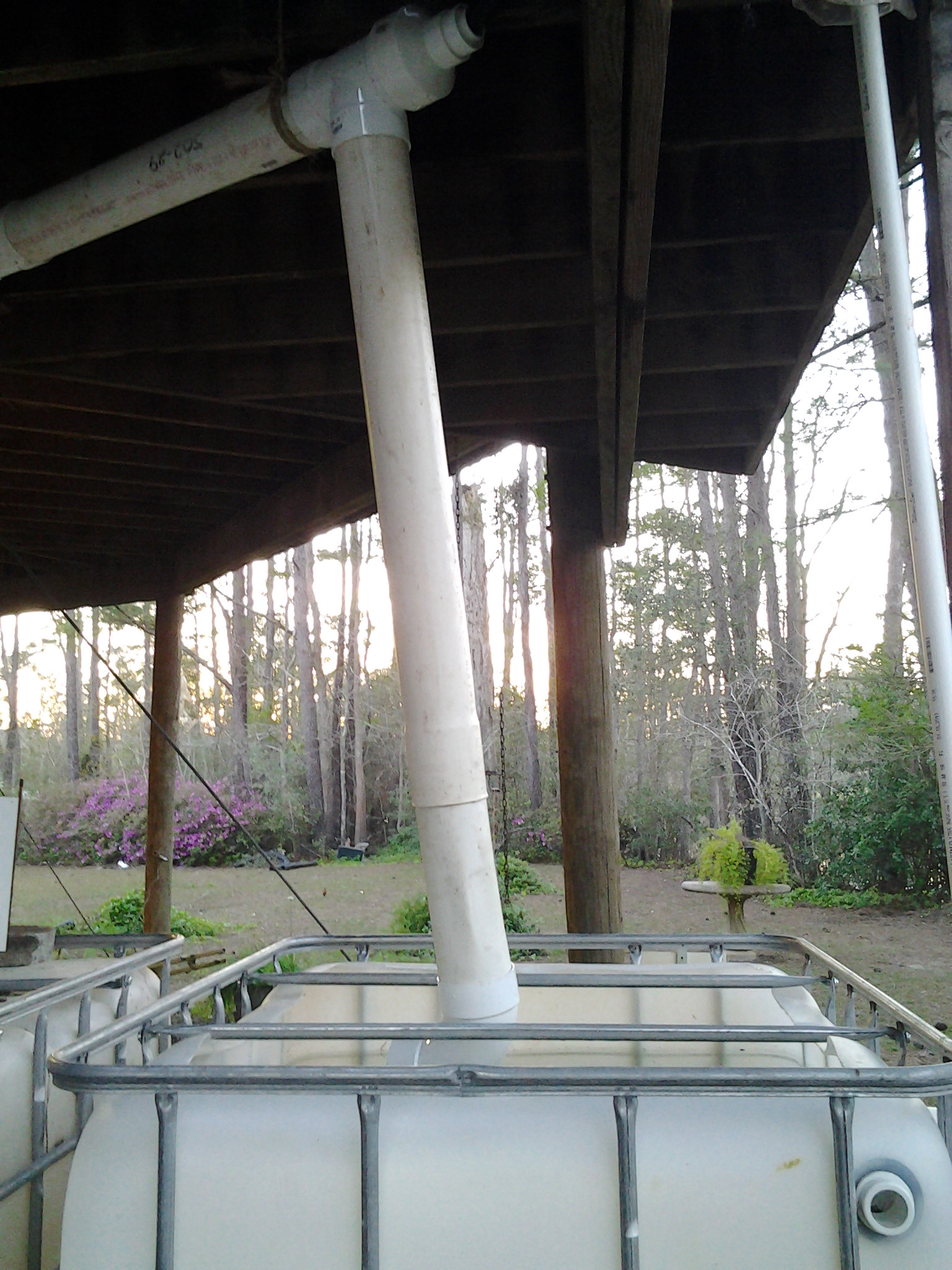 This is how one of the fish tanks looks where the 4″ pipe enters.  I’m considering if I want to add a sprinkler type flow or smaller jet type.  As I said, this is just a temporary arrangement until I decide how I like it. 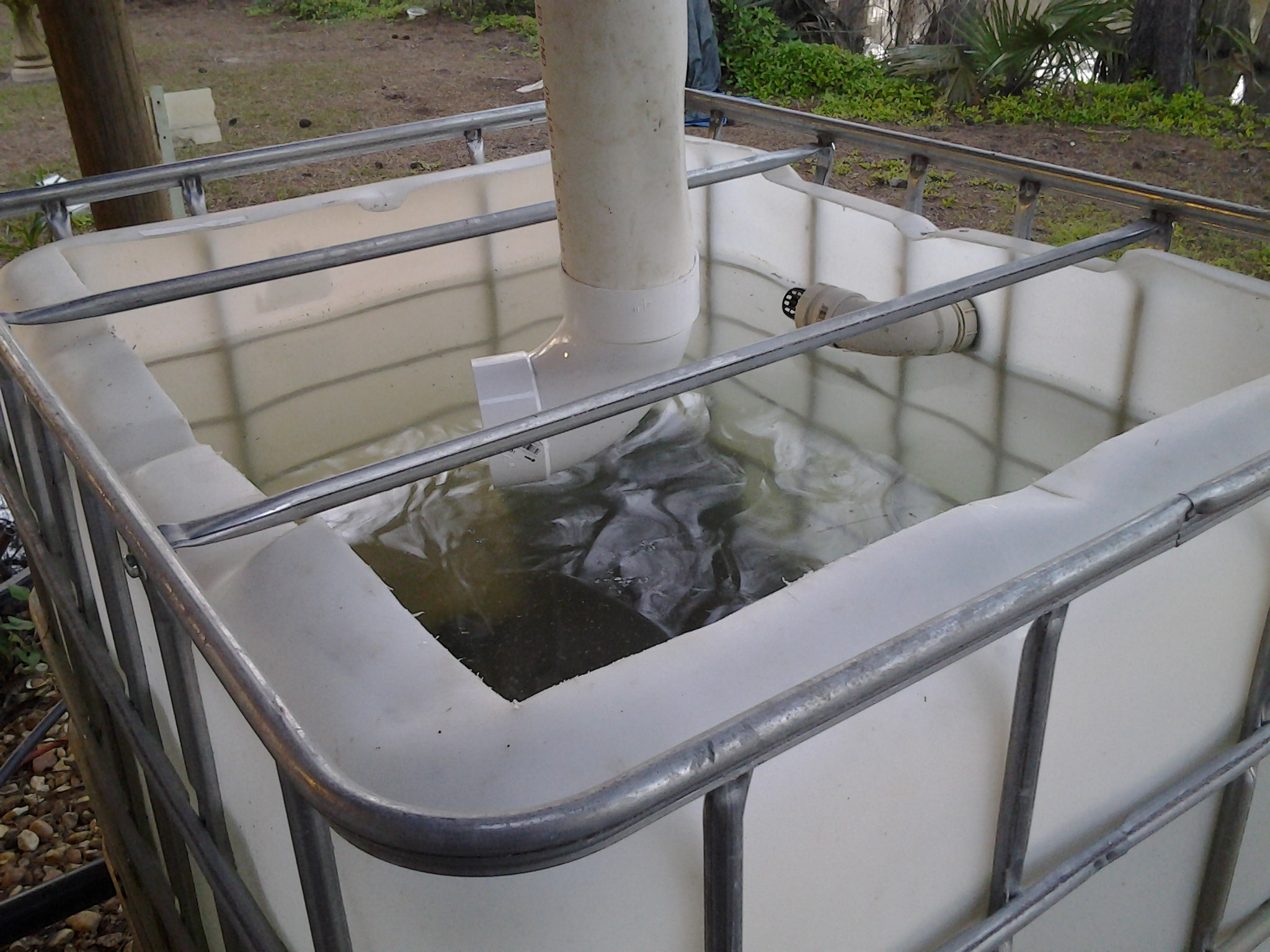 The water that is pumped into the 1″ pipe eventually finds it’s way to the upper deck grow tubes.  I have 6 rows of tubes and when completed, there will be 2″ holes drilled into the tops of the tubes every 6 to 8″ for the net pots.

The water will be pumped into the top grow tube and will flow down to the bottom tube and then into the floating raft container on the left side of the photo.  There is an overflow tube that keeps a constant water height to float the raft and then return the water into the 4″ tube to the fish tanks and back to the pump. These square tubes are not mounted properly yet.  When finished they will be square and level end-to-end. 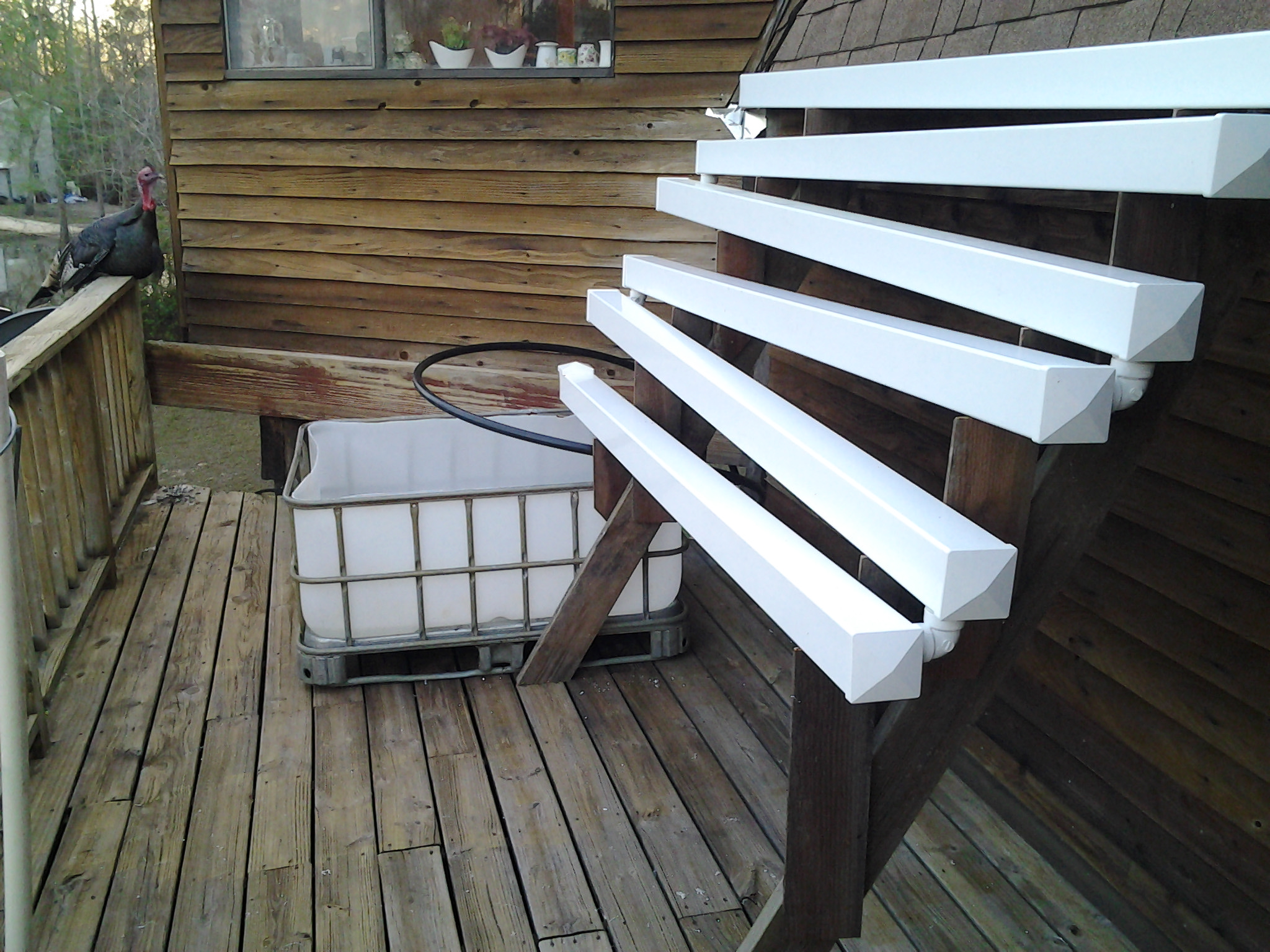 P.S. On the left side of the photo you can see the wild turkey that lives on the property.  I would say, that I allow him to stay but that would not be entirely accurate.

Thomas (the name I chose for him) showed up on the property about 3 years ago and decided to allow me to stay.  He thinks he owns the place and I’m just there to give him food and clean up the turkey poop he drops all over the deck and the yard.

Posted in the water is the life | No Comments »